"The greatest evils in the world will not be carried out by men with guns, but by men in suits sitting behind desks."


"The descent into hell is easy and those who begin by worshiping power soon worship evil."

"It is not done even in concentration camps and labor camps. In those we see its final result. But it is conceived and ordered (moved, seconded, carried and minuted) in clean, carpeted, warmed and well-lighted offices, by quiet men with white collars and cut fingernails and smooth shaved cheeks who do not need to raise their voices. Hence, naturally enough, my symbol for hell is something like the bureaucracy of a police state or the office of a thoroughly nasty business concern."

These previous quotes are attributed to CS Lewis and here is Buddha's perspective:

Joseph Smith is quoted, "I love that man better who swears a stream as long as my arm yet deals justice to his neighbors and mercifully deals his substance to the poor, than the long, smooth-faced hypocrite."

I think it was CS Lewis who correctly said that there is far more agreement on what is right and wrong in different cultures than disagreement. What Buddha is quoted as saying above was also likely taught by a Hindu, a Sikh, St. Paul, Moses, Joseph Smith, and others today. Real agreement on this subject spans across cultures and there are behaviors that are consistently condemned across the world.

Therefore, if you ever find a man dressed in a suit and tie with a white collared shirt with smooth shaven cheeks, take immediate note!

If you find him to appear clean and attractive with immaculate care sitting behind a desk situated in a warm well-lighted office, take note again!!

Often accompanied by charisma and the ability to convince or deceive by cunningly devised words, he is able to use his power, influence, and position to lift himself up for a light unto the world that he may get gain and praise of the world. If this is occurring, take note again!!!

If you find any lying, slandering, abuse, gossip, or hatred, pay attention!

Furthermore, if you detect any envy for wealth, position, or power, perceive a pattern of clinging to false doctrines or illusions, or recognize religious or civil leaders who fail to deal justice to his neighbors and mercifully deals his substance to the poor, then pay attention again!!

If long, smooth-faced hypocrites set up rules, traditions, and corrupt laws that require you to pay money, in forms of taxes, tithing, donations, or other methods, and attach stiff consequences of failure, pay attention again!!!

One of the most important things you can do in your life is to learn to pull back the curtain of fear so you can have a better perspective of what is really happening as the enemy blows a lot of smoke and pushes your sensitive buttons.

Whenever the fullness of the Gospel of Jesus Christ is restored, including the fullness of the priesthood, the holy order, covenants, and associations and relationships with angels, heavenly beings, and God Himself, men will immediately begin to imitate, pretend, and claim to represent the real things. Lucifer is the promoter of such and makes what he does resemble and look like what the Savior does. Lucifer attempts to mirror the Lord's work and teaches as closely as possible what the Lord teaches, but carefully and slightly alters the truth, partially skews reality, or leaves it short or incomplete. Satan tends to claim what the Savior claims and makes the same promises. The promises made by the Savior always come to fruition, but Lucifer does not and cannot walk his talk when he makes the same promises and claims as the Savior does. In every case, Lucifer does so falsely so that it cannot save anyone. 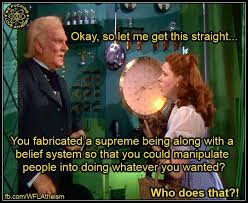 Lucifer likes to gain control over whatever the Savior establishes to manipulate people. Sometimes Lucifer is able to take control of the actual House of God, His temple, and His Church, by easily fooling the weak-minded into believing that they have salvation, are doing many wonderful things in His name, and are His preferred people when, in reality, they only have a powerless imitation, do not know God face to face, and are not His friends. And to them He will say: “I never knew you; depart from me ye that work iniquity.” (Matt. 7:21-23) If Lucifer is able to take control of the Lord's House by tricking or deceiving the people, then, the adversary has employed the best way known to insure that no one is saved, while almost everyone thinks they are. What an ingenious way for Lucifer and his followers to damn mankind!!

Without the curtain being pulled, much remains hidden, out of view, and missed altogether until it's too late. Therefore, take note, pay attention, open the curtain wide to more fully expose evil, be wise, and act accordingly!

Posted by John and Jennifer at 4:14 PM No comments: