Please take note of the two different mathematical equations above. Both begin differently but end up communicating the same message.

In both equations, the first line tends to make little sense and therefore provides less meaning to most people. However, after using mathematical laws to rearrange the equations, the last line begins to make sense and the message becomes more clear to almost everyone. In fact, it can be quite enticing to me, and therefore, I have probably found ice cream and enjoying it now as you are reading :)

That's how a lot of things from God seem to be at first. They sometimes appear to be unclear, incomplete, or simply wrong from our limited perspectives. Unfortunately, the very words of God are often attributed to the wrong source and considered to be of error, delusion, or apostasy. In addition, persecution arises toward those who recognize, believe, and live according to His word. The things of God are often misunderstood, run contrary to what we have been taught in this world, clash against religious beliefs and bonafide men, and therefore can be very offensive and repulsive when first encountered.

On the other hand, after the word of God is seriously considered, observed from all angles, pondered upon, and tried over a period of time with due diligence, it all becomes much more clear and the things of God seem to fit much better. The things of God become enticing and greatly desired. When a person finally chooses to embrace God and sacrifice all else required, she may never want to look back and it will likely never be the same :)
Posted by John and Jennifer at 3:16 PM No comments:

The Road Not Taken 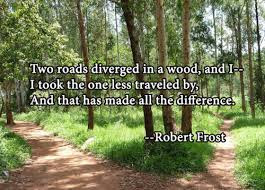 Two roads diverged in a yellow wood,
And sorry I could not travel both
And be one traveler, long I stood
And looked down one as far as I could
To where it bent in the undergrowth;

Then took the other, as just as fair,
And having perhaps the better claim,
Because it was grassy and wanted wear;
Though as for that the passing there
Had worn them really about the same,

And both that morning equally lay
In leaves no step had trodden black.
Oh, I kept the first for another day!
Yet knowing how way leads on to way,
I doubted if I should ever come back.

I shall be telling this with a sigh
Somewhere ages and ages hence:
Two roads diverged in a wood, and I—
I took the one less traveled by,
And that has made all the difference.
Posted by John and Jennifer at 6:03 AM No comments: