Recently, some friends cleaned up their yard, woodpile, and miscellaneous stuff. There were some leftover boards, some used paint and stain, and other building materials that were generously offered to us. Our children accepted the offer, claimed the awesome pile of lumber, and have been in heaven sawing, hammering, and building. 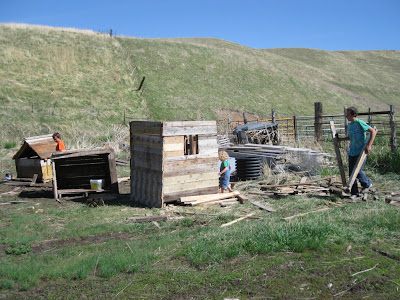 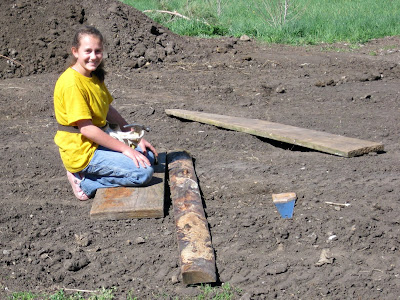 The boys have been busy, each constructing a clubhouse of their own. Their homes measure approximately 4’ by 4’ and vary in height. Old pallets were used as the base and floor. Walls were then built with a roof over head. 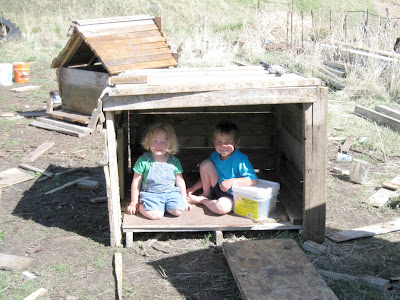 Jared is working on a larger home; it even has a swinging front door. He made plans, calculated the slope of the roof, designed the sizes of the openings, and used his measurements to saw the lumber that would be needed. He then accurately nailed the boards together. He did a great job. 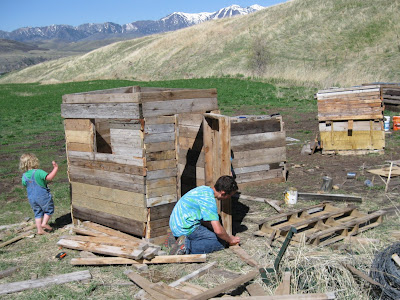 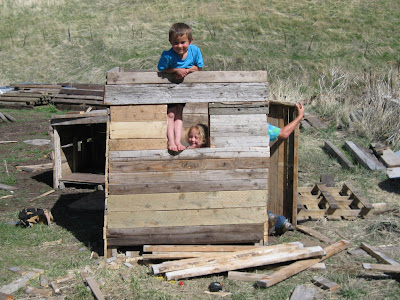 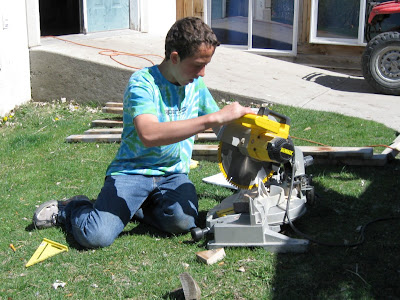 Joshua and Jonathan worked together building their homes and had occasional help from Jared. Jonathan’s house has a flat roof, and Joshua’s dwelling has a sloped roof.  They have thoroughly enjoyed themselves and have put the donated supplies to good use. They are having a lot of fun, using up 30 lbs. of Dad’s 16-penny nails, and proudly show the other members of the family their new homes. 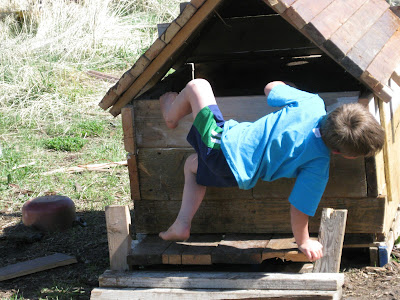 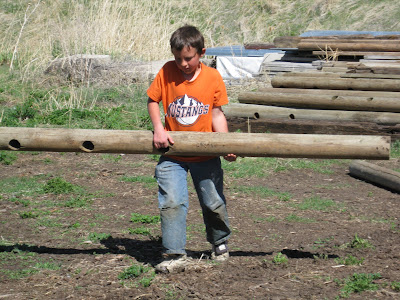 Just lately, Joshua had the idea, “Let’s put our clubhouse up in the air on stilts!” They went to work. Both Joshua and Jonathan, with Joseph and Marianne periodic help, dug the post-holes and set the posts in position. Marianne mostly enjoys playing in the holes and filling them with dirt. The boys then patiently dig the dirt back out of the holes. The plan was to put Joshua’s house on posts about 5 feet off the ground. 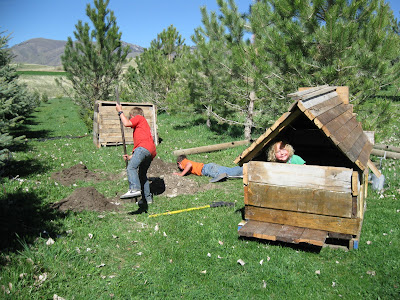 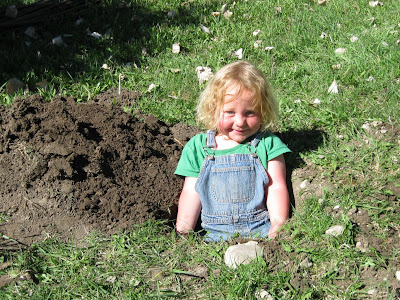 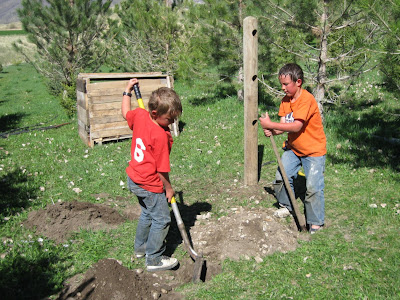 They wanted to move their homes and set their posts in a new location. Their pre-built homes are located up at the east end of the farm about ¼ mile away. They needed help moving two heavy homes. They elicited Dad’s help. A plan was made. 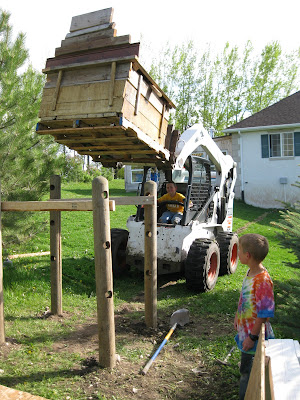 They decided the Bobcat skidsteer with forks would do the job, and it did. Moving the homes to the new location was an exciting adventure. The Bobcat was also useful in lifting Joshua's clubhouse up and securing it on the posts. 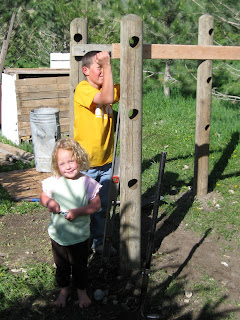 After having completed their individual clubhouses, Jonathan and Joshua decided to merge efforts and expand their dreams. Joshua offered his clubhouse to be jointly used as their home, and Jonathan’s would serve as a tool shed for them both.

A ladder was needed to access the new residence that was up on stilts They found one already built into the structure. The posts had pre-drilled holes intended for fence rails. The holes worked perfectly as a ladder. 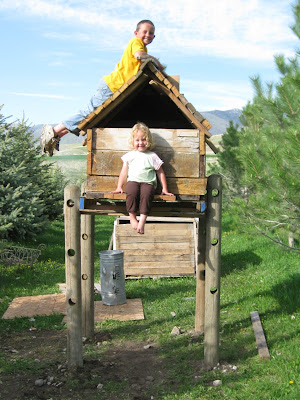 They also wanted to wire their new homes so they could install a light and a receptacle to plug their alarm clocks into. They were merely talking to me about this and asking questions about how to accomplish it, etc. I was explaining how it could be done, where we might be able to bury a wire, and connect to power in another location.

I was just talking and dreaming with them, but they were transforming their dream into reality. I thought we were only chatting and daydreaming about digging a trench, but they were excited to electrify their clubhouses.  I didn’t remember giving permission to dig the trench, but they already had it done in their minds. 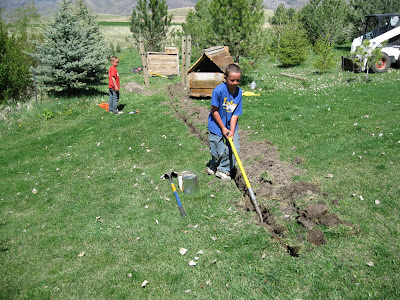 When I went out to check on them a little later, I found the newly dug trench was already half way across the lawn. They act just like me. I would have done the same thing as a boy, making my dreams come true. They did a clean and neat job. Well, I guess it’s okay; let’s just finish it! So, we completed the trench, put in the waterproof electrical wire, and buried it. 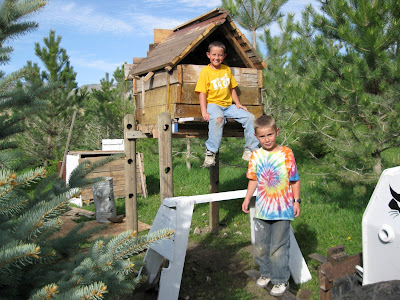 A little time passed, and a new dream surfaced. Let’s build a second floor above our shed and make it into another house. I am learning that their dreams transform into action rather quickly. They started the building process and had the second floor well under way. The main stick framed walls and roof were almost done, but they ran out of lumber to cover it with the outer "skin".

They are now working to earn money to buy lumber. Since older siblings have real jobs milking cows, they are often willing to hire the younger ones to do their weekly dish duties. Joshua and Jonathan are excited to earn money doing Jared’s and Emily’s dishes so they can buy more lumber for their clubhouses. 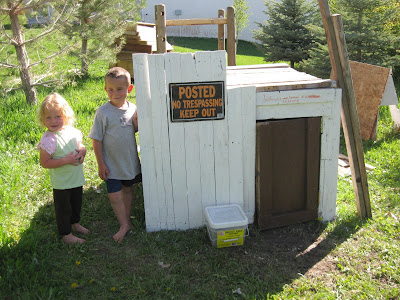 A week or two later the ownership agreement changed on the homes.  Joshua and Jonathan decided to go back to owning their own individual clubhouse instead of sharing both of them.  Jonathan now has the house that is on stilts.  Joshua has Jonathan’s old house and is building the second floor on it.

When they were sharing homes, they wrote their names on the one story, soon to be two-story, clubhouse. April told them it was bad handwriting, so they repainted.  Joshua is now the sole owner of the house that sits on the ground. April wrote Joshua’s name on his new home in her "professional" handwriting. Joshua also has a lock on his front door. 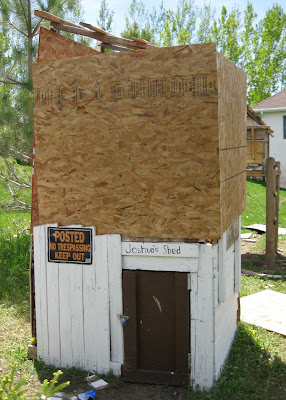 They have secured some tin roofing from an old barn that was torn down and plan to use it for the roof over the second floor. This is really turning into a major development and an exciting project for all.

It has proved to be a learning experience for many. Don’t leave upright nails to step on; it hurts. It’s painful to miss the nail and hit your finger with a hammer. Watch out for your fellow partners when swinging a board around, etc.

I think everyone has experienced to some degree enthusiasm, passion, misunderstandings, quarrels, disappointments, satisfaction, fulfillment, and just plain fun.
Posted by John and Jennifer at 11:59 PM