We were down at the church cutting trees when the demolition began.  The street was lined with curious onlookers. Even though it’s heartbreaking to see the Old Paradise Church ruined, I found the demolition process to be very interesting. 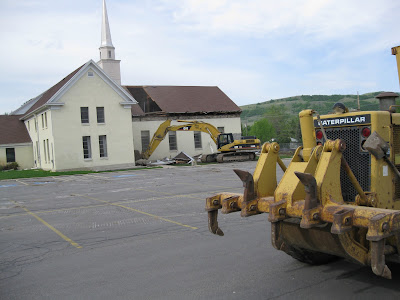 They are planning to use some of the original rock in the façade of the new church.  At the beginning stages of demolition, they left the walls standing while they pushed the roof down into interior of the original building.  Then they pulled the rock walls outward, and a big cloud of dust went up.  A loader was used to scoop up the rock and put it in a pile.  They will use some of the rock on the new church and let the members of the community take the rest of it in remembrance of the Old Paradise Church. 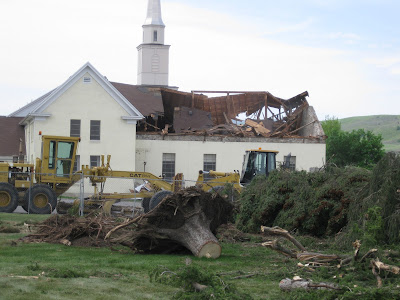 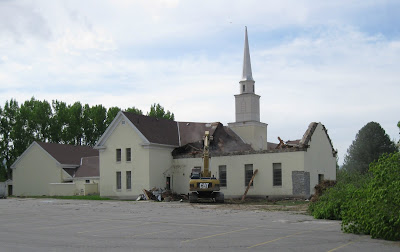 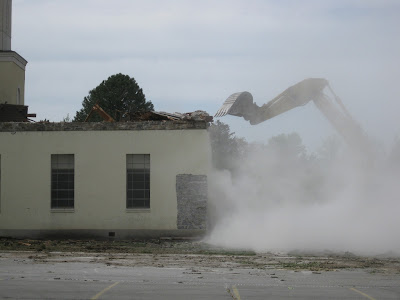 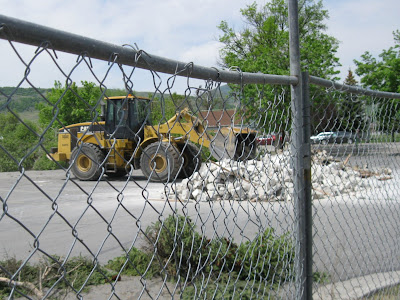 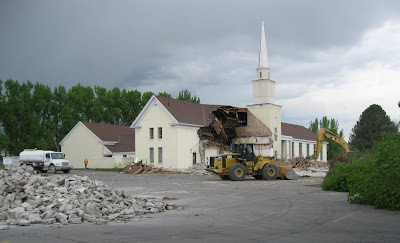 The track hoe operators seemed to know the routine of razing a building and chose bearing walls and supporting beams as the first objects to damage and weaken. This corrupted the structural integrity of the church. 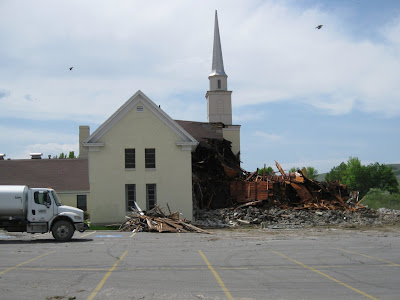 Using this tactic and polluting the strength of key structural components, the building crumbled and collapsed. The veneer and façade disappeared, and the overall appearance changed rapidly. The outer shell, shingles, roofs, trusses, adjoining inner walls, and many other non-structural features of the church came tumbling down. Without the sustaining, bearing, and structural parts that supported the adjoining sections, the entire façade went to ruin, and the exterior form fell to pieces. 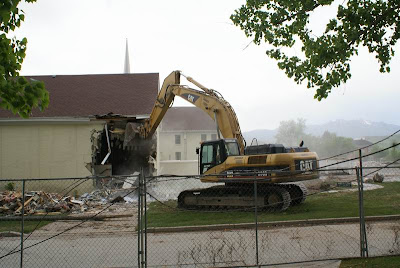 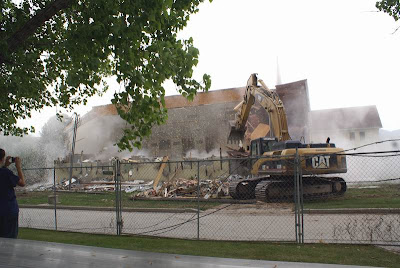 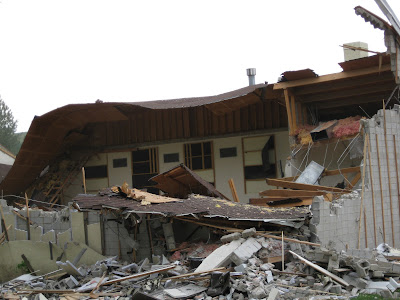 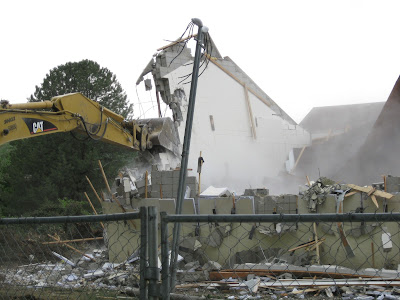 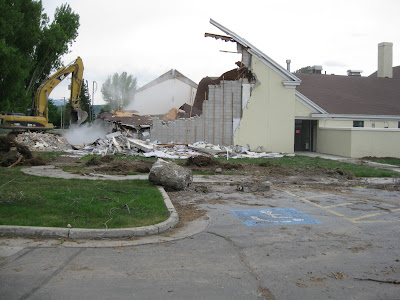 As things fell to the ground in a cloud of dust, the track hoe operator used the big heavy bucket and systematically crushed the unbroken material, packed it down tight, and drove upon it. The fallen pieces of the destroyed church were squashed, run over, and used as a higher platform to support the merciless, destroying track hoe. 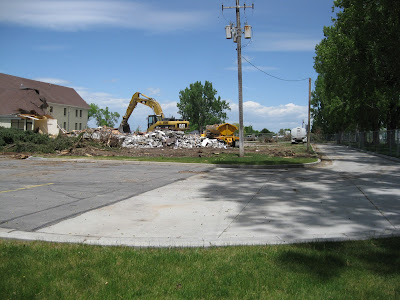 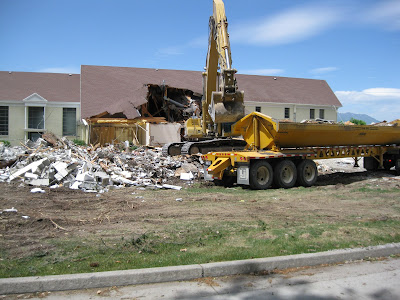 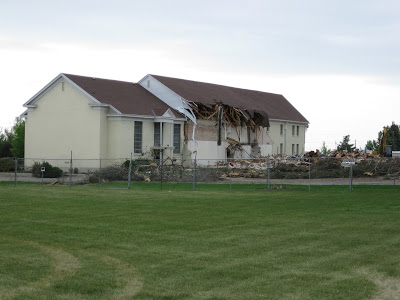 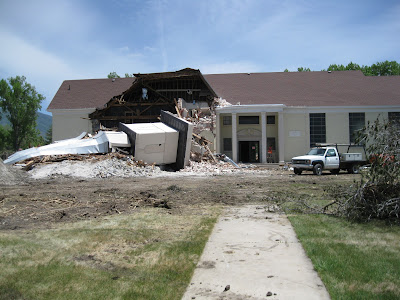 Being in a position of power, the track hoe continued unrelentingly tearing down, tromping under its tracks, and destroying the church building.

On the eighth day of demolition, the entire church was leveled flat; except for one stonewall that remained upright. Rubble, disorder, and chaos reigned with objects protruding here and there and everywhere. It was a complete mess. The sight of the destroyed church turned out to be a little harder on me than I expected. The feelings that were created caused some emotion. It was more distressing than any other demolition experience I have witnessed before. 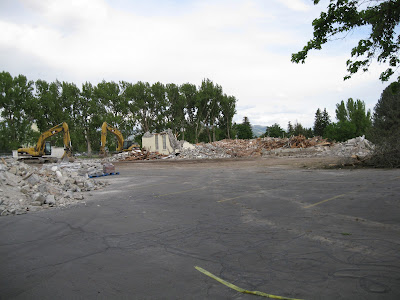 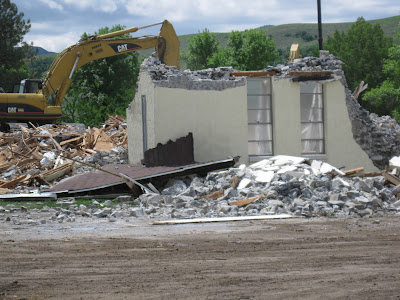 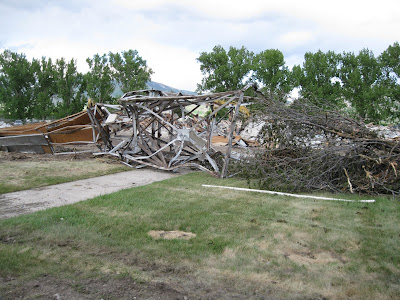 It looked like a war zone of desolation that needed a major cleanup job. A track hoe was positioned on top of the remains of the dismantled church. Scattered debris was pushed into a pile. The track hoe advanced upon, mashed, broke, and chopped up the waste. It systematically scooped up the remaining pieces of the church and dumped the garbage into large semi dump trailers. Several semi dump trailers were running to and from a dump location. The mess began disappearing rather quickly. In a short time, the heart of Paradise transformed from a place of worship that held many memories to a vacant lot. 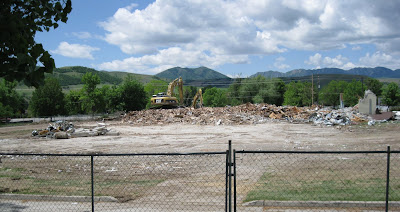 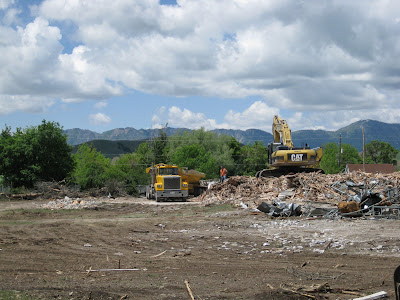 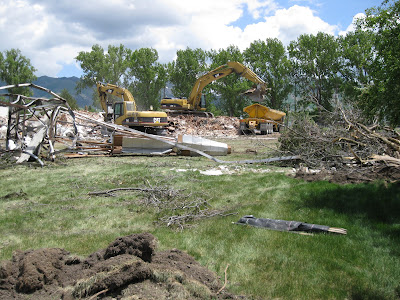 A new modern church building is anticipated to take its place. It’s quick and easy to destroy and requires little effort; but time, patience, knowledge, and work are required for creation.
Posted by John and Jennifer at 5:12 PM